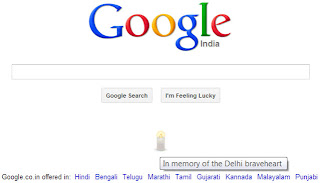 Some days before a candle was showing on the wall of google www.google.co.in in the memory of delhi rape case. Google India supporting Damini Rape case with Candle on Google India Search page.

But today the candle was disapear from google www.google.co.in. Candle is not showing on the home page or wall of google.

NEW DELHI: The six accused in the Delhi gang-rape case had allegedly tried to mow the girl down under the bus after dumping her in south-west Delhi but her male friend saved her from being crushed.

Oh this is really heart breaking. That girl must have﻿ seen death even before she actually died. India is facing such a problem, let us think about the ROOT of this problem…..this is the abortion that are being carried out when is it known that an indian woman has a baby girl in her womb. India is facing the shortage of females in some areas, if not all. As male are finding it hard to find a companion they are going out and raping like animals….Wake up india and indian men.