Skip to content
Ringing Bells,, a little-know Noida-based company, has launched the Freedom 251 smartphone in New Delhi on 17-Feb-2016.  At the launch, the company said you can buy the Rs. 251 smartphone by booking on the official website freedom251.com from 6 am on February 18 to 8 pm on February 21.The deliveries, however,  will be completed four months later – by June 30, 2016. This article covers Freedom 251, which might be the cheapest smartphone in the world, its specifications, What are the concerns about Freedom 251,Why is it so cheap and How to Book?

On Surface of it Freedom 251 seems good. Specifications are given below. 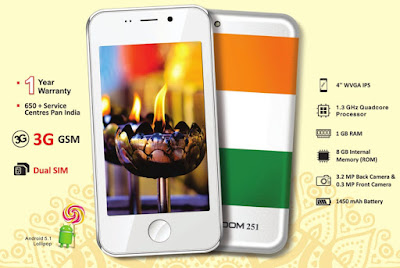 Ringing Bells Freedom 251
The Freedom 251 looks like yet another iPhone clone, not only on the exterior (complete with the circular home button) but even the app icons appear like a rip-off of what’s found on iOS.